is content with what God gives. It is enough. All is grace. 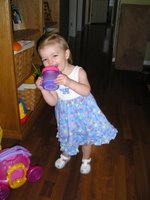 Weâ€™ve slowly been transitioning Hannah from a bottle to a sippy cup for a few months. It really wasnâ€™t a terrible process, I donâ€™t know why I thought it might be. But, there was no screaming for the missing bottle (in fact, she hasnâ€™t even said â€œbottleâ€ yet!), no defiant refusal to use the cupâ€¦it was a very easy transition!

We had been using the cup off and on for a while – especially at meals, but started the â€œofficial transitionâ€ after her birthday. Then, one evening, I noticed that she was taking sips from her bottleâ€¦and that was the end of it. Sheâ€™s been using a cup ever since – and I havenâ€™t heard one complaint! (And, just to make sure thereâ€™s no turning backâ€¦I packed up all of the bottles, and put them away!)

Itâ€™s funny, you look forward to these milestonesâ€¦You look forward to not having to wash the bottles, and having a countertop that isnâ€™t cluttered while they dry, and having more cabinet space (so you can put away those sippy cups!)â€¦and in my case, not waking up in the middle of the night to kitties playing hockey with the nipples that were accidentally left on the counter! But, then the moment that you have been so eagerly awaiting comes, and, itâ€™s actually kind of sad. This is one of those big indications that sheâ€™s not a baby anymore, but a full-fledged toddler!